An example from a regional government perspective

A regional government wants to derive insights to inform policy-making. To this aim, they built a repository of data on Higher Education, Research and Innovation (HERI). SIRIS Academic worked with the regional government to help them fully benefit from its strategic information system, by designing in close collaboration with them the analysis and indicators that were most relevant to their mission.To this aim, SIRIS Academic worked in close collaboration with the reference people in the regional government to define the indicators that were most relevant to their mission.

This step led to the co-design of a set of indicators, organised to address specific questions of interest for the regional government, such as its degree of internationalization, the characteristics of its higher education institutions, the areas of specialization of its research system, the specific research competences of its companies, and so on.

We created an interactive web document that:

An example of how we helped the regional government to address its questions is given by how we approached the characterization of the higher education system.

A higher education system is a complex universe, composed of several institutions and actors, and several components, such students (both undergraduate and graduate) and academic staff.
Of course, a regional system does not exist in isolation, but it is embedded in a wider network, at a national and international scale, calling for the need of comparing oneself against relevant benchmarks.

The interactive web document allows to characterize both the student and the academic staff population, and features a mapping between taxonomies characterising different components of the higher education and research system.
To address the “competitiveness” of regional HE systems in attracting students, it is useful to compare the mobility pattern of students in the region of interest, with respect to selected benchmark regions:

To assess in further detail the intra-regional mobility, we explored the regional distribution of students enrolled in a certain discipline, visualising the evolution of the enrolled students per disciplinary area in a 15-years time range, to understand the emerging macro-features (an example of the resulting plots is provided below):

… and again, compare it to the evolution in selected benchmark regions.

Alongside students, to fully understand a HER system it is fundamental to analyse also the academic staff. The graphics below show the evolution, in absolute numbers and in percentage, of the academic staff in the region of interest, allowing for a comparison with respect to the student population: 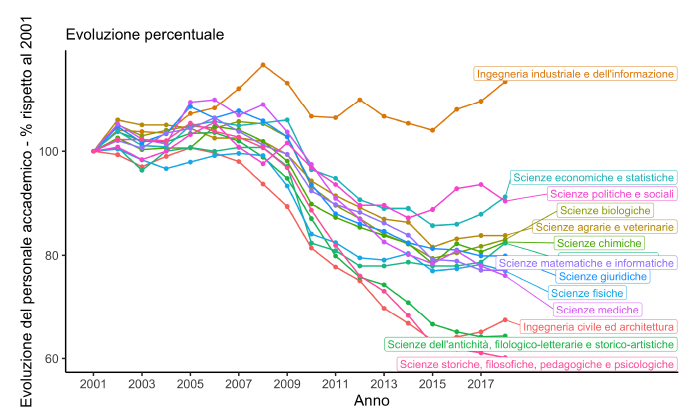 The graphics shown so far are focused on the undergraduate students, but similar questions and indicators are derived for the graduate student population.

An interactive exploration of the current situation on EU-funded research and innovation related to the Sustainable Development Goals (SDGs) proposed by the UN.

Finding partners and understanding the networks in a given area

Regional government, wanting to understand how its S3-related initiatives’ fit within the general Research and Innovation (R&I) panorama and other funded projects.

We support research-policymakers in discovering trends in R&D and in identifying emerging strengths of local research & innovation ecosystems.

This website uses cookies to improve your experience while you navigate through the website. Out of these, the cookies that are categorized as necessary are stored on your browser as they are essential for the working of basic functionalities of the website. We also use third-party cookies that help us analyze and understand how you use this website. These cookies will be stored in your browser only with your consent. You also have the option to opt-out of these cookies. But opting out of some of these cookies may affect your browsing experience.
Necessary Always Enabled

Any cookies that may not be particularly necessary for the website to function and is used specifically to collect user personal data via analytics, ads, other embedded contents are termed as non-necessary cookies. It is mandatory to procure user consent prior to running these cookies on your website.